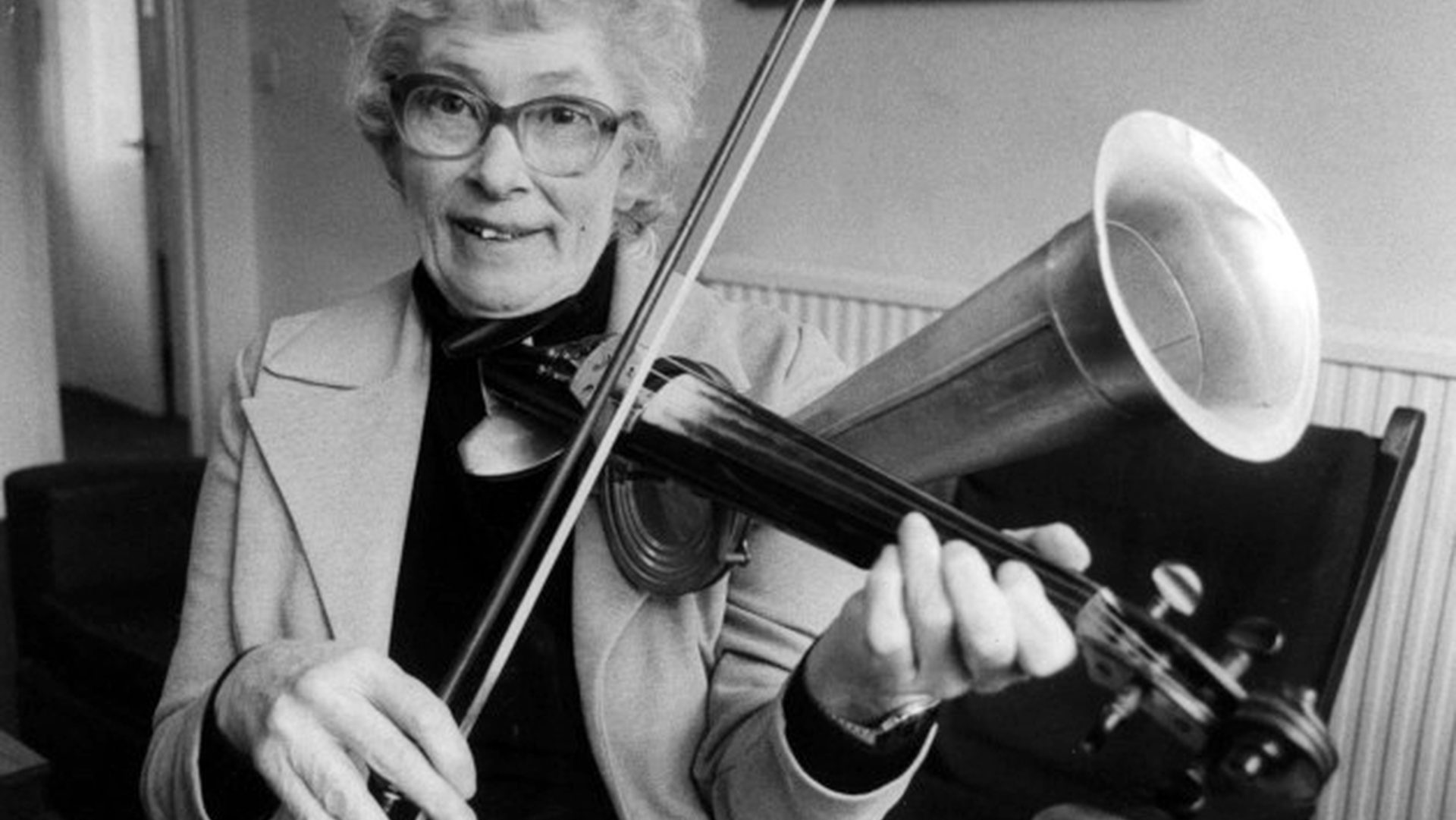 We first met Julia Clifford at a Party to celebrate her 70th birthday organised by George and Eileen Monger near Stowmarket, Suffolk, England, in the summer of 1984. This started a great and intense friendship that lasted up to 1987 when sadly our pursuit of better jobs took us away from Julia to London.

We had arrived in Ipswich in 1983 after a sabbatical year playing Irish music and living and working on an historic building renovation project in Derbyshire. When that ended we found ourselves staying with Caroline’s mother in Ipswich. We stayed in Ipswich for 4 years, a 45 minute drive from Thetford where Julia lived, and went to many sessions and folk clubs. We also played for barn dances and did some pub gigs.

Julia was the kind of person that just after meeting her a few times made people feel they had known her their whole lives. She was always happy, easy-going and loved playing music. Very quickly we became her means of transport to sessions, gigs, festivals and generally became available and up for any musical excuse to play. We visited her at her home in Thetford umpteen times. We would play and talk and she was very keen to introduce us to her huge repertoire of tunes. Of course our big interest was in her Polkas and Slides. Our approach to Polkas and Slides at the time was very ill-informed. We just simply played Polkas as fast as we could and really had no experience with Slides.  Listening to Julia changed all that. Caroline got it immediately but it took me a while. Sometimes Julia would play a tune and I would whisper to Caroline ‘What kind of a tune is that?’ and it was one of Julia’s complex sounding Polkas which she played so effortlessly.

It wasn’t all Polkas and Slides with Julia either because she could put any player to the pin of their collar when she would lash into a set of fast reels and she knew them all, including our favourites from the Bothy Band, Planxty, Chieftains, De Dannan and often played them in the same combinations as on their recordings.

She really enjoyed doing an ‘engagement’ as she called it, which involved her doing a gig at a folk club. It was a kind of a comical process.

Caroline and I would go to a folk club and do a floor spot and say that Julia Clifford was available to do some gigs and asked if they could book her. We had come across folk clubs when we lived near Nottingham where there were about 20 clubs within a one hour drive. We had seen Liam O’Flynn, Andy Irvine and performers of that ilk, and really enjoyed the folk club format. So when we moved to Ipswich we tracked down the local folk clubs in that area. Everyone seemed to enjoy our music so it gave us an opening to ask about a gig for Julia. But this invariably gained the response ‘Well she’ll have to come and do a floor spot first’. After recovering from the request we should have realised that Julia would be delighted to come and do a floor spot because it was a night out and she always thoroughly enjoyed the chance to play, albeit only a couple of sets of tunes. Whenever Julia played it was never half-hearted or careless, but on any kind of stage or solo performance she had a definite edge to her playing which could have more to do with how the listeners responded than any extra effort on her part. While Julia was born into the trade of traditional music she put her own stamp on it and her own open, jovial and generous nature just swept everyone up in an inclusive rather than an exclusive way. Her music was captivating. Whether you were a musician or non-musician, with an informed ear or not, everyone got something from Julia’s performance, especially the characteristic smile when she would look around the room and catch someone’s eye.

A visit to Julia involved us loading up the instruments including a keyboard and speaker as Julia loved the piano accompaniment, and sometimes we would be joined by other musicians such as Nigel Towse on Bodhran and bones. She would make a ton of sandwiches and very strong tea and her famous currant bread with lashings of butter. The kind that leaves teeth marks in each bite. It was an opportunity to get her to tell some stories and during her ‘engagements’ I would call upon her to tell one of those stories. 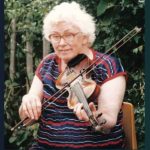 An ‘engagement’ first involved a call to all the local Irish session musicians to come out and support the folk club gig and to play with Julia. We had no programme plan as such but just before the first engagement she said ‘Oh do I have to go up there and play on my own?’ So I said ‘’Ah sure, we’ll go up and sit around you just like at a session and we’ll all play a tune to start. Then you play a few on your own, or with Caroline on the piano.’’ So that became the format – all go on the stage, a group tune to start, then Julia would play on her own, and tell some stories. Caroline would often join her on some special polkas which made a nice combination of fiddle and flute. We peppered the whole engagement with introductions to the tunes and stories from Julia. Her story-telling was excellent – delivered in her normal conversational voice, maybe a little louder, as it was almost always an acoustic gig. Her timing was perfect, as good as any professional actor or comedienne, leaving pauses when she knew where certain quips would hit home so that laughter or applause never drowned out the follow-on or punchlines. Every gig we did was one hundred percent successful: always a genuine attentive response from the audience and a great night for the musicians, with great tunes and a chance to play and perform with Julia.

We accompanied Julia to the National Folk Festival in Leicestershire a couple of times, and through Julia, were introduced to other great musicians and singers, such as Noel Hill and Frank Harte.

Julia took everything in her stride and I don’t recall her every complaining about anything. She was always respectful of other musicians and other types of music. We were at a folk club once when a fiddle player employed acrobatic antics as part of his performance, which involved playing the fiddle on his head, behind his back, on one leg, and even standing on his head against the back wall of the stage. The music wasn’t great and our curiosity of Julia’s opinion must have been palpable because on this rare occasion Julia did make a comment and it was ‘’Ah, the poor fiddle’’.

We played a few ceilis and barn dances which involved the use of microphones. Julia had a habit of giving the mic a couple of solid taps with her bow to check that the mic was on and that it was loud enough. These were our mics which gave me concern, but those two SM58’s still work fine surviving Julia’s taps 30 years ago. Another memory involving the ‘taps’ was at a Chieftains concert at Snape Maltings. The Chieftains found out that Julia was in the audience so half way through they called her up to play a set of tunes with them. Julia went up and Sean Keane handed her a fiddle. Paddy Moloney was introducing her and Julia was chatting to Sean Keane. Julia seemed to ask Sean a question and I knew immediately what it was, because he pointed up towards the mics that were suspended from the ceiling. The mics were tiny, about the size of a pencil, hanging on the end of a cable.  I don’t know if this really happened or if I imagined it or if it was just a good one made up by someone, but Julia reached up to give the mic a tap of the bow to see if it was loud enough. She missed on the first attempt but not on the second………….

emigrating to America in 1993. She came and stayed at our house in Pinner for a week during which we played at some of the London folk clubs. We went to visit her one last time shortly after the birth of our son Patrick and despite being sad to see us go, she was very happy holding Patrick on her lap. Something must have rubbed off on him, because now Patrick plays plenty of Julia’s Polkas and Slides on the fiddle and is currently playing with a pub band in London.

In Cleveland Ohio we immersed ourselves in the local Irish Music scene. We noticed a distinct lack of Polkas and Slides being played, but the rise in County Set Dancing with many sets requiring lots of Polkas and Slides had us dusting off all those tunes we learnt from Julia, and 22 years later we left behind an intense dose of Julia’s Polkas and Slides and returned to London in 2014. We arrived back in London and quickly slumped into an existence of two demanding jobs and little or no music. Then a Facebook contact from Katie Howson about ‘I looked East and I looked West’ (an event being organised in April 2019 to celebrate Julia’s life and music) awakened Julia in us and now a day doesn’t go by that doesn’t have some new discovery or some old connection rekindled.

A holiday in the Netherlands to visit two great friends of ours, and of Irish music, Guy Roelofs and Jenny Van Diggelen, had us listening to and copying tapes of Julia, Caroline digging up handwritten transcripts of Julia’s tunes and Guy very kindly, not only digitizing our tapes, but also creating a website to make those home recordings of Julia’s playing and Caroline’s transcripts available to everyone.

This website is a collection of mp3 files made from live recordings of Julia at her home in Thetford, sessions and other public performances, with PDF transcriptions of the tunes. The transcriptions, although accurate, are only the bare bones of the tune with no attempt to include the many extemporary vagaries of Julia’s playing. The best approach is to listen to the audio files over and over, and only use the transcriptions as a guide.

We made many of the recordings on a Marantz cassette tape recorder at Julia’s house during the period when we lived in Ipswich, 1984 -1987. Julia was very keen to play tunes for us to record so that we could learn them and play along with her. The equipment was basic but it got the job done. Back then we had never heard of the internet and never expected the recordings to reach a wider audience. We are very grateful to our friend, Guy Roelofs from the Netherlands, for the formidable task of digitizing the recordings and creating this wonderful website!